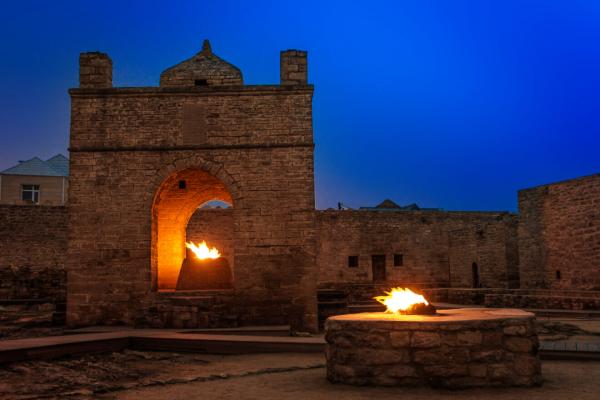 Versatile, cosmopolitan, prosper; Azerbaijan is an extraordinary place where you can find ancient and modern, urban and rural, mountains and beaches, and nevertheless, this country is always ready to amaze, charm you with its beauty and people.

As soon as you put your feet on the Azerbaijan soil, arriving at Skytrax awarded Heydar Aliyev International airport you can feel the breeze of the Caspian Sea and you will be immediately treated with the highest hospitality.

On the route to the city you can stop at famous 17th century temple “Ateshgah”, which was used as a Hindu, and Zoroastrian place of worship. Ateshgah was a pilgrimage and philosophical center of Zoroastrians from Northwestern Indian subcontinent. The pentagonal complex is consisted of a courtyard surrounded by cells for monks and a tetrapillar-altar in the middle with the natural eternal flame. “Ateshgah” is in the Tentative List of UNESCO since 1998 and was declared a state historical-architectural reserve in 2007.

Azerbaijan is also interesting for Formula 1 fans. Just recently, the fans witnessed a grandiose race that astonished everyone. Besides the interesting moments of the game, the spectators all over the world could see the magnificent ancient walls of Baku and the modern skyscraper reminding the flames wrapped into Azerbaijani tricolor. Baku, the capital of the Republic of Azerbaijan has become one of the most popular tourist destinations of the decade. Considered to be the bridge between East and West, the modern and the ancient, Azerbaijan has a great touristic potential for all tastes.
In this regards, if you are interested in medical tourism, then you should visit Naftalan city that is located in 320 kilometers west of Baku in the foothills of the Lesser Caucasus Mountains. Naftalan is also the name of a unique grade of black oil, found in that city. It is known for its naphthalene content and has been used for its health-giving properties since the ancient times. The spa-hotels in the city are equipped with special bathes. People using the oil generally sit in that bath and are covered in oil up to their necks. It is proven to be an effective treatment of the diseases of musculoskeletal system, skin diseases, and rheumatism. The nature surrounding the town is spectacular as well and gives an extra feeling of bliss.

Azerbaijan is rich for its healing mineral waters. One of such resorts- Istisu sanatorium, located in Kalbajar region at an altitude of 2,225 metres was included in the list of all-union importance resorts during the Soviet period. At that time, about 50 thousand people were treated in Istisu every year and more than 800 thousand litres of mineral water were produced daily.
The springs were formed as a result of swelling and cracking of the earth’s crust after a large earthquake in the 12th century. The healing properties of the springs have been known to the local population since then. Right now the government of Azerbaijan is working on revitalising the Istisu resort and Kalbajar region and in the nearest future this renewed touristic spot will occur on tourist top-lists.